The latest from Taras Grescoe

Taras' award winning look at how cars brought our cities to the brink of disaster, and what we can do to save them. Visit site 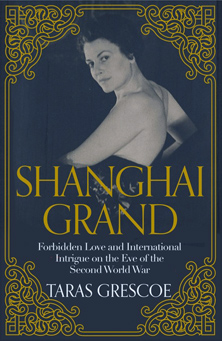 Taras' most recent book, the critically acclaimed Shanghai Grand, is a passport to the International Settlement of the 1930's. Visit site 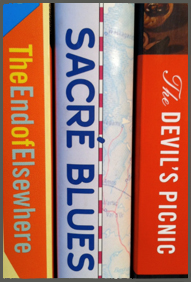 Taras's first book was Sacré Blues, a portrait of contemporary Quebec that won Canada's Edna Staebler Award for Non-Fiction, two Quebec Writers' Federation Awards, a National Magazine Award (for an excerpted chapter), and was short-listed for the Writers' Trust Award. It was published in 2000 by Macfarlane, Walter & Ross, and became a Canadian bestseller. Writing Sacré Blues helped Taras fall in love with Quebec, and explained the origins of poutine to an eternally grateful country. The publisher let it go out of print, but used copies sometimes be found on Amazon or Abebooks.

His second book, The End of Elsewhere: Travels Among the Tourists (2003), which was published by McClelland & Stewart, involved a gruelling nine-month journey by foot, rented Renault, India railway 2A sleeper, and túk-túk, from one End of the Earth (Finisterre in Galicia) to the other (Tianya Haijiao, the End of the Earth in Hainan, China). An exploration of the origins and impacts of mass tourism, The End of Elsewhere saw Taras walking from west to east along a thousand-year-old east-to-west pilgrimage route, stuffing his belly on a cruise ship from Venice to Istanbul, and observing the antics of sex tourists in the flesh-pots of Thailand. It was nominated for a national Writers' Trust Award, and was then published to great critical acclaim in England by Serpent's Tail. The New Yorker called it "A gloriously trivia-strewn history of tourism."

His third book, The Devil's Picnic: Around the World in Pursuit of Forbidden Fruit, was a real labour of love. Taras revived a post-adolescent interest in debauchery and (temporarily) turned it into a vocation, chewing coca leaves in Bolivia, scoring hjemmebrent moonshine in Norway, and puffing on Cuban cigars in the smoke-easies in San Francisco. This one was published by Bloomsbury in New York, Macmillan in London, and HarperCollins in Toronto in 2005. Critics seemed to love the Picnic; the New York Times called it "vivid and entertaining," and the New Statesman said "Grescoe's book is a perceptive, cogent and witty analysis of the enduring folly that is prohibition." Almost everybody seemed to consider it a rollicking good read, with a serious subtext about nanny states and the limits of individual liberty. It sold quite well, and was translated into German, French, Chinese, and Japanese, but didn't get nominated for anything. Apparently nobody wants to give writers prizes for having a really, really, good time (no matter how serious that subtext).

For more information on his fourth book, Bottomfeeder, click here, and for more on his fifth book, Straphanger, click here.

Or reach out to him directly: tgrescoe (at) hotmail (dot) com