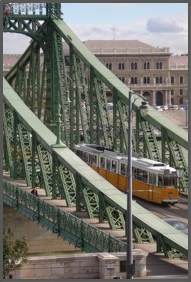 These organizations and individuals, in North America and abroad, do a great job of chronicling and mapping the ongoing revolution in urbanism and transportation.


Reconnecting America
"Where we live matters." A Washington, D.C. based non-profit that advises civic leaders on how to create better communities for all. Particularly strong on transit-oriented development. Jeff Wood's daily email and web newsletter, The Other Side of the Tracks, is an invaluable round-up of transit, rail, and urbanism related news stories.


Transportation for America
"We need to get America working again." Washington, D.C. based coalition of housing, environmental, public health, transportation, and other organizations that campaigns for cheaper, faster, and cleaner transportation options.


The Transport Politic
A highly political blog, with an international perspective, about rail and urban transit, by the prolific and opinionated Yonah Freemark.


The Atlantic Cities
"Place Matters." Essential one-stop website for all that is happening today's global cities and neighborhoods. Overseen by University of Toronto urbanist Richard Florida.


UrbanRail.Net
An encyclopaedic website and blog devoted to the subway and urban rail systems of the world, run by metro fan Robert Schwandl. Includes maps, capsule histories, statistics and huge stocks of photos.


US High Speed Rail Association
A non-profit trade association that lobbies for, in its words, "a 17,000 mile high speed rail system built in phases for completion by 2030."


Straphangers Campaign
Organization founded by NYPIRG that struggles for better conditions for straphangers on New York's buses and subways. Hands out the annual Pokey and Schleppie Awards for the city's slowest buses.


Institute for Transportation and Development Policy
Works with cities around the world, especially in developing countries, to bring about transport solutions that cut greenhouse gas emissions, reduce poverty, and improve the quality of urban life.


NYCSubway
David Pirmann's encyclopaedic, unofficial site chronicling the history and minutiae of every nook, cranny, and ghost station of the New York subway.

Goddard, Stephen B. Getting There: The Epic Struggle Between Road and Rail in the American Century. New York: Basic Books, 1994.

Kay, Jane Holtz. Asphalt Nation: How the Automobile Took Over America and How We Can Take It Back. Berkeley: University of California Press, 1998.

Mumford, Lewis. The City in History: Its Origins, Its Transformations, and Its Prospects. New York: Harvest/HBJ, 1961.

Rome, Adam. The Bulldozer in the Countryside: Suburban Sprawl and the Rise of American Environmentalism. New York: Cambridge University Press, 2001.

Soderstrom, Mary. The Walkable City: From Haussmann's Boulevards to Jane Jacobs' Streets and Beyond. Montreal: Véhicule, 2008.